Mac OS X makes it easy to run the C Programs. Right now, I am using Mac OS X Bigsur which is the latest version. Also, I am using XCode’s GCC compiler, and XCode’s release is right now 10. So, if you are not using Mojave, then my suggestion is to upgrade your OS to Mojave and then update your XCode so that You will get the maximum benefit from Apple Development Team to get new features. If Mojave is unsupported to your Macbook then also, you can use this post to run the C programs. If you have an XCode, then you have the C compiler.

Finding the best programming laptops is a lengthy process since you need to have some knowledge about technical specs. Plus, there are lots of high tech laptops available in the market that will vary in cost. If you are looking for the best programming laptops, then you should buy a laptop with a high-grade processor with 256GB SSD, 8GB ram, and a 2 GB Graphics card. It will run any programming software without lagging and will give you the best user experience.

How To Run C Program On Mac Tutorial 2021

You can check the latest C version by typing the following command in your terminal.

The “C-program” is not supposed to be run. It is meant to be compiled into an “executable” program which then can be run from your terminal. You need a compiler for that.

If we need to develop C programs, then there are two things that we need:

Now, open a code editor. I am using Visual Studio Code because it has excellent support for C, C++ languages. So let us spin up the visual studio code and create one file called helloworld.c and add the following code inside it.

Save the file, and now first we need to compile the code.

To do that, go to the terminal and go to the root of our project and type the following command. You can use any of the commands to compile the C file.

It will generate one more file in the same directory called a.out

Now, this file is the compiled file, and now we need to run this file to get the output in the terminal.

So again type the following command and hit the enter key or return key.

Now, it prints the output in the terminal.

Now, let us say we have any syntax error in our program like the following code.

If your editor does not have linter, then it won’t tell you the error in the editor then you will realize when you compile the program. So let us compile it and see what we got. We know that we have missed the semicolon.

We will see the error like this, and that error clearly says that we have missed the semicolon at the end of the line.

Remember, when you change in the code, you will need to recompile otherwise the changes are not reflected in the output.

I am using Visual Studio Code and I have installed the linter extension for C, C++ language. So the syntax error will show up on the Editor like this. 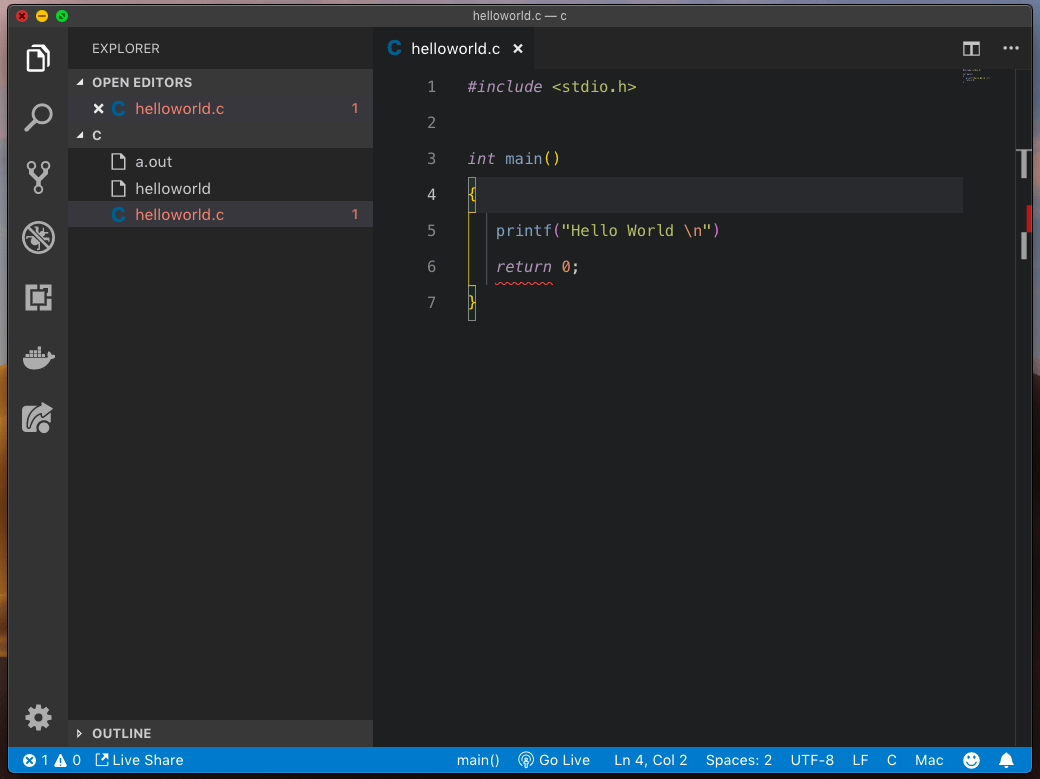 Finally, How To Run C Program On Mac Tutorial 2021 is over.

Krunal Lathiya is an Information Technology Engineer by education and web developer by profession. He has worked with many back-end platforms, including Node.js, PHP, and Python. In addition, Krunal has excellent knowledge of cloud technologies including Google Cloud, Firebase, AWS, and Azure, and various softwares and tools.

This site uses Akismet to reduce spam. Learn how your comment data is processed.

We use cookies on our website to give you the most relevant experience by remembering your preferences and repeat visits. By clicking “Accept All”, you consent to the use of ALL the cookies. However, you may visit "Cookie Settings" to provide a controlled consent.
Cookie SettingsAccept All
Manage consent

This website uses cookies to improve your experience while you navigate through the website. Out of these, the cookies that are categorized as necessary are stored on your browser as they are essential for the working of basic functionalities of the website. We also use third-party cookies that help us analyze and understand how you use this website. These cookies will be stored in your browser only with your consent. You also have the option to opt-out of these cookies. But opting out of some of these cookies may affect your browsing experience.
Necessary Always Enabled
Necessary cookies are absolutely essential for the website to function properly. This category only includes cookies that ensures basic functionalities and security features of the website. These cookies do not store any personal information.
Non-necessary
Any cookies that may not be particularly necessary for the website to function and is used specifically to collect user personal data via analytics, ads, other embedded contents are termed as non-necessary cookies. It is mandatory to procure user consent prior to running these cookies on your website.
SAVE & ACCEPT